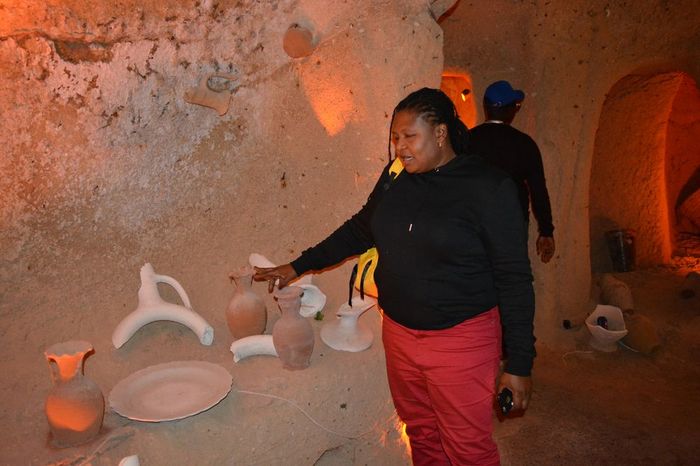 Then they travelled across a wide plain covered with Olive trees, and with them travelled an Ethiopian and his two camels, who led a woman on a mule through the woods. And as they went on their way, a lion with gaping jaws came out upon them growling and roaring, ready to seize and devour them; it terrified them greatly. But the Ethiopian said: “Have no fear-let us go forward.”

So without hesitation they proceeded on their way and as they approached the lion it turned aside and, through the help of Almighty God, left the way open for them to continue their journey. And they said that a short time after they had left that place they heard the same lion roaring, as if in his fury he would devour many of the men who went there to gather olives.

When they came to the town which is called Ptolomaeis, which stands by the edge of the sea, they continued their journey and reached the summit of Libanus, where that mountain juts out into the sea and forms a promontory. There stands the tower of Libanus. Anyone who lands there without having a safe conduct cannot pass through the place because it is guarded and closed; and if anyone comes without a pass the citizens arrest him immediately and send him back to Tyre. The mount is between Tyre and Ptolomaeis. Then the bishop came to Tyre for the second time.

When Bishop Willibald was in Jerusalem on the previous occasion he bought himself some balsam and filled a calabash with it; then he took a hollow reed which had a bottom to it and filled it with petroleum and put it inside the calabash. Afterwards he cut the reed equal in length to the calabash so that the surfaces of both were even and then closed the mouth of the calabash.

When they reached the city of Tyre the citizens arrested them, put them in chains and examined all their baggage to find out if they had hidden any contraband. If they had found anything they would certainly have punished them and put them to death. But when they had thoroughly scrutinized everything and could find nothing but one calabash which Willibald had, they opened it and snuffed at it to find out what was inside. And when they smelt petroleum, which was inside the reed at the top, they did not flnd the balsam which was inside the calabash underneath the petroleum, and so let them go.