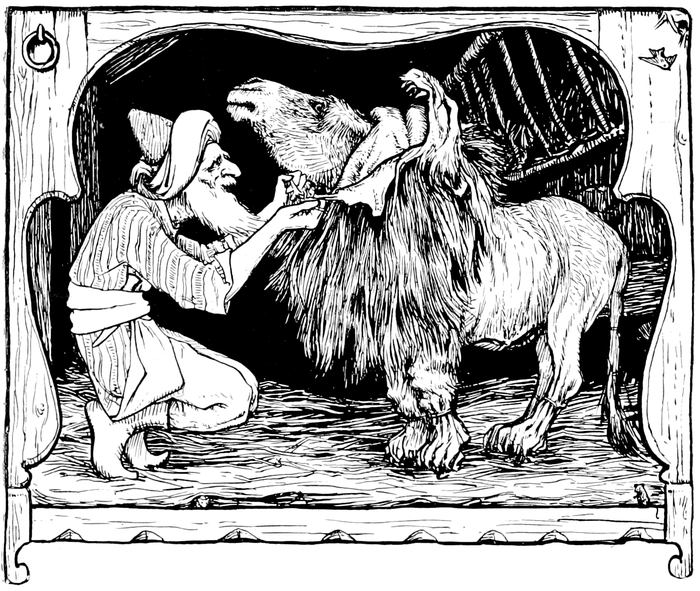 Nothing whatsoever is known of the author or authors of the particular collection from which this story is taken. It is reprinted from Buddhist Birth Stories [Nidana-Katha], by T. W. Rhys Davids, London,
1880, by permission of the publishers, Kegan Paul, Trench, Trubner and Co.

The Ass in the Lion`s Skin

Once upon a time, while Brahmadatta was reigning in Benares, the future Buddha was born one of a peasant family; and when he grew up, he gained his living by tilling the ground.

At that time a hawker used to go from place to place, trafficking in goods carried by an ass. Now at each place he came to, when he took the pack down from the ass`s back he used to clothe him in a lion`s skin, and turn him loose in the rice and barley-fields, and when the watchmen in the fields saw the ass, they dared not go near him, taking him for a lion. So one day the hawker stopped in a village; and while he was getting his own breakfast cooked, he dressed the ass in a lion`s skin and turned him loose in a barley-field. The watchmen in the field dared not go up to him; but going home, they published the news. Then all the villagers came out with weapons in their hands; and blowing chanks, and beating drums, they went near the field and shouted. Terrified with the fear of death, the ass uttered a cry— the cry of an ass!

And when he knew him then to be an ass, the future Buddha pronounced the first stanza

“This is not a lion`s roaring,

Dressed in a lion`s skin,

`Tis a wretched ass that roars!”

But when the villagers knew the creature to be an ass, they beat him till his bones broke; and, carrying off the lion`s skin, went away. Then the hawker came, and seeing the ass fallen into so bad a plight, pronounced the second stanza:

Clad in a lion`s skin,

Have fed on barley green,

And that moment he came to ruin.”

And even while he was yet speaking the ass died on the spot!

The whole text can be seen on link The Ass in the Lion`s Skin.