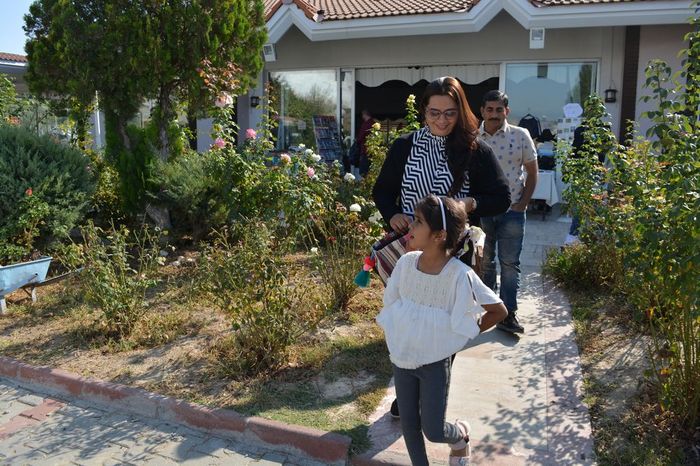 All the Thessalians were on horseback [or they were all mounted on Thessalian horses], and what with their iron cuirasses and helmets on their heads gleaming brightly, the horses pricking up their ears, and the shields clashing together, such a brilliant light falling from their persons and their helmets caused terror. Bryennius too, circling amidst them like an Ares or Giant, overtopping all the others head and shoulders by an ell, was a sheer wonder, and object of dread to the onlookers. Outside this regular army at about two stades’ distance were some allied Scythians, distinguished by barbaric weapons. And the order given was that when the enemy came in sight and the trumpet sounded the attack, the Scythians should at once fall upon them from the rear, and distress the enemy by thick and continuous showers of darts, whilst the rest should form in very close order, and attack with all their might.

That was how one general disposed his men. My father, Alexius Comnenus, on his side, after examining the lie of the land, placed half his men in some hollows, and the rest front to front with Bryennius. When both sections, both the hidden and the invisible, were in battle array, he aroused the bravery of them individually by winged words, and enjoined upon the division lying in ambush to attack suddenly, and dash with the greatest possible force and violence against the right wing of the enemy, as soon as they perceived they were to the rear of them.

Coma and the Turkish forces

The so-called “Immortals” and some of the Celtic troops he reserved for himself, and took command of them in person. He appointed Catacalon leader of the troops from Coma and the Turkish forces, and bade him pay special attention to the Scythians and to counter their incursions. Such then were the dispositions of the armies. Now, when Bryennius’ army had come near the hollows, then, immediately on my father, Alexius, giving the signal, the men in ambush Jumped out on them with wild yells and war cries. And by the suddenness of their onslaught, each striking and killing those whom he chanced to meet, they threw the enemy into a panic, and compelled them to flight.

But John Bryennius, the own brother of the general, mindful hereupon of his “impetuous strength” and courage, turned his horse with his [16] curb, and cutting down at a blow the “Immortal” coming at him, stayed the discomfited phalanx, rallied the men, and drove the enemy off. The “Immortals,” in their turn, began to flee headlong in some disorder, and many were cut down by the soldiers who were ever behind them.

Read More about Eulenspiegel and the Merchant part 2